These badass Marines held off an entire Viet Cong battalion

In the summer of 1966 the United States was ramping up operations in Vietnam.For the Marines of the 1st Reconnaissance Battalion, this meant deep infiltration and reconnaissance into the Que Son Valley.

Dubbed Operation Kansas, the recon teams moved deep into enemy-held territory to observe and strike at the North Vietnamese Army and Viet Cong operating in the area.

This mostly consisted of calling for artillery or air support to take out small concentrations of enemy fighters. When larger groups were observed, they were dealt with by calling in reinforcements in the form of Marine rifle companies and battalions.

There was little intention of the recon Marines making direct contact. 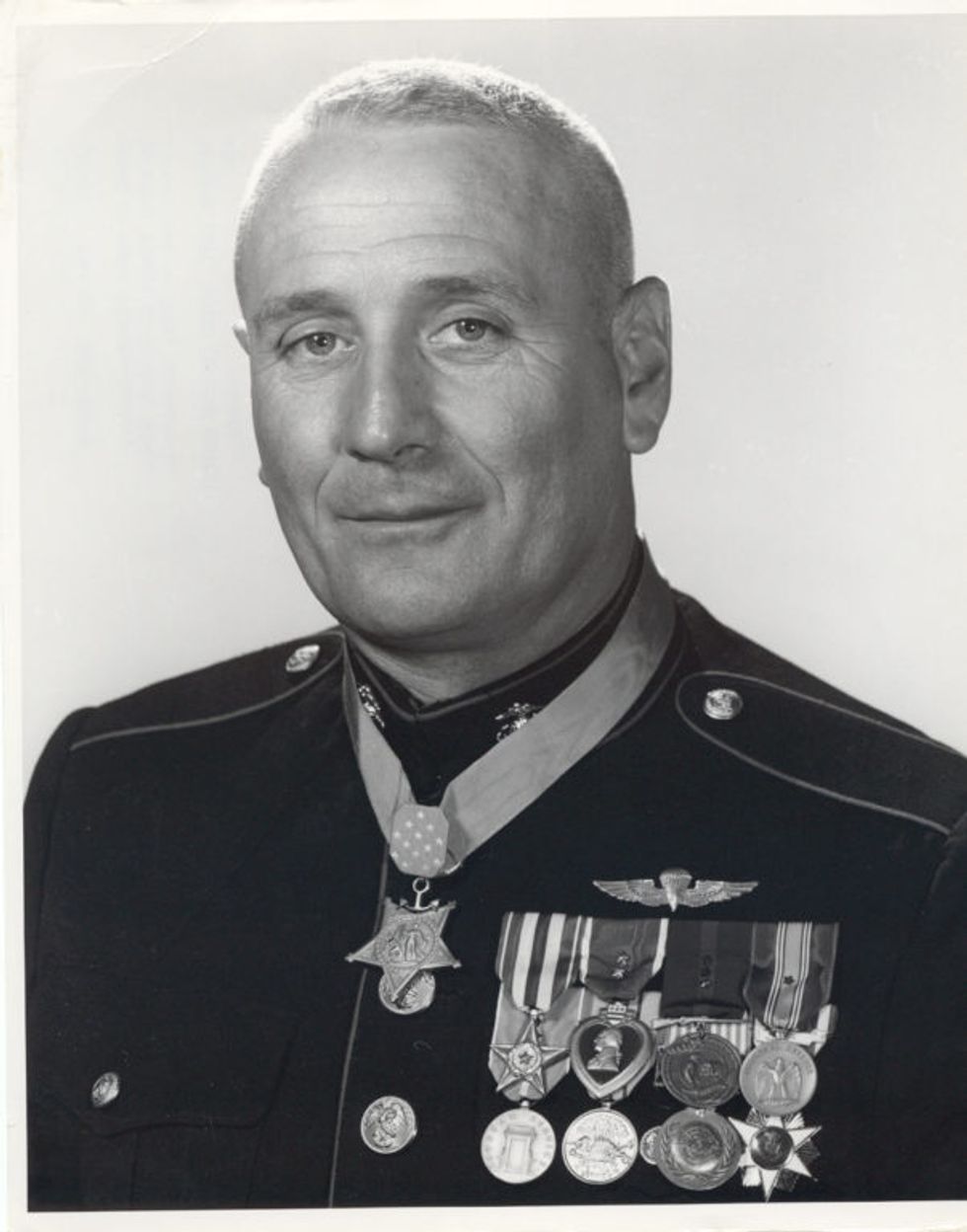 Jimmie E. Howard was a Staff Sergeant when he led the defense of His 488. (U.S. Marine Corps)

The team was led by Staff Sgt. Jimmie E. Howard. Howard had enlisted in the Marine Corps in 1950 and was assigned to the 1st Marine Regiment in Korea.

While serving as the forward observer to the regimental mortar company in 1952, Howard was awarded a Silver Star and two Purple Hearts while defending outposts along the Main Line of Resistance.

After his tour in Korea, Howard stayed in the Marine Corps and entered Marine Reconnaissance. In early 1966 he returned to combat in Vietnam, leading a platoon of Reconnaissance Marines.

On the night of June 13, 1966, Operation Kansas began with the insertion of numerous recon teams into the Que Son Valley. Team 2 on Hill 488 quickly set up positions to observe the valley. Over the course of the next two days, the recon teams disrupted enemy activity with air and artillery strikes. Howard and his team were doing so well that they turned down an offer to be extracted in order to remain one more day.

Unfortunately, the accuracy and effectiveness of the firepower Howard's team brought to bear also served to alert the Viet Cong that these were not simply random attacks; they were being watched. The enemy had also surmised that the observation must be coming from Hill 488. Alerted that a Viet Cong battalion of approximately 200-250 men was heading their way, the Marines prepared to defend themselves.

As the Marines waited for the inevitable, the Viet Cong were creeping up the hill toward the Marine positions. Howard had ordered his men to pull back to a rocky knoll at the top of the hill the moment contact was made. Under the cover of darkness, the first Viet Cong made it to within 20 feet of the Marine perimeter. The first shots from the Marine defenders rang out. Under a hail of gunfire and grenades, the Marines fell back to the final defensive position.

The Marines took casualties almost instantly but they responded with determined resistance. Grenades and mortars rained down on their position as heavy machine gun and rifle fire covered the advance of the attackers. But the Marines mowed down the first wave of attackers and blunted the advance. The remaining enemy took a more cautious approach and searched for an opening.

Howard used the brief lull in fire to call for extraction. Before help could arrive, the Viet Cong mounted another determined charge to take the hill but were again driven back. By this time the Marines were out of grenades, running low on ammunition, and all eighteen had been wounded or killed. But there was still more fighting to do.

After some three hours of fighting, air support arrived overhead. As Air Force planes dropped flares to illuminate the valley, gunships and fighters made strafing runs. They dropped napalm on the advancing enemy. To say the air support was danger-close would be an understatement. Despite the air attack, the enemy was persistent and continued to charge the hill.

At one point the Viet Cong began yelling at the Marines, taunting them. The young Marines of the recon team looked to Howard who gave them the go ahead to yell back.

Then, with the enemy still shouting taunts, the remaining Marines literally looked death in the face and laughed their heads off. The whole team joined in a chorus of laughter that silenced the Viet Cong.

With the enemy still probing their lines, the beleaguered Marines relied on their expert marksmanship and a little trickery to even the odds. Out of grenades, the Marines would watch for movement and then hurl a rock at the enemy.

Intending to escape the impending explosion the Viet Cong would expose their position. Then with deadly accuracy the Marines would take a single shot, conserving ammunition and racking up the body count. 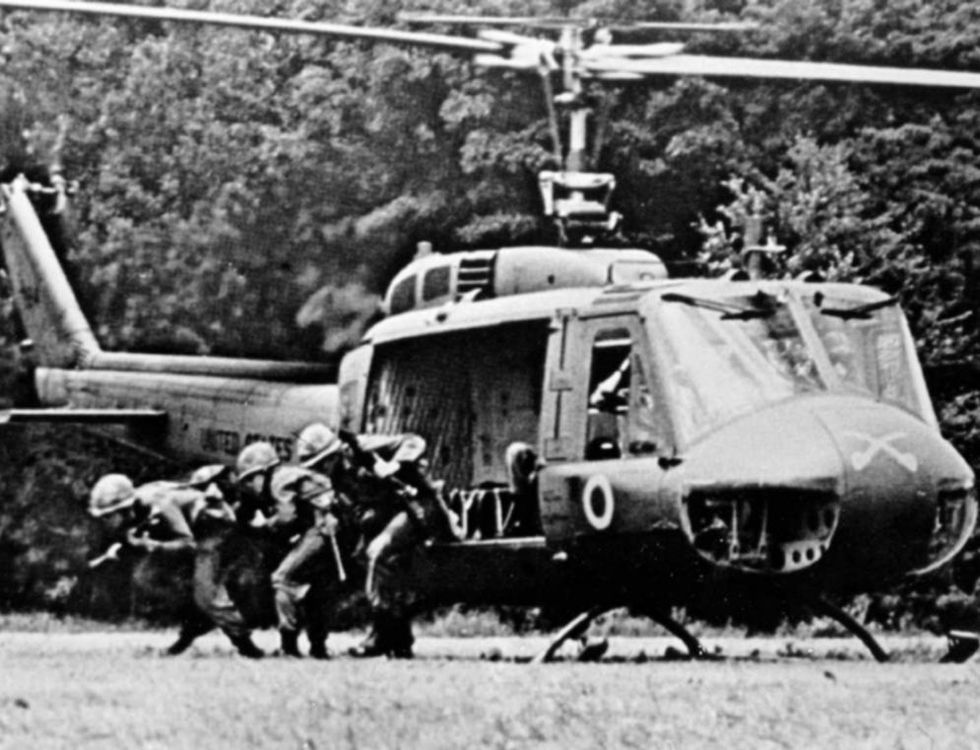 Two UH-1s were shot down by the Viet Cong forces during medevac and air support attempts. (U.S. Army)

A rescue attempt at dawn resulted in one lost helicopter, with a medevac waved off due to the intense fire. Eventually it was decided to bring in a Marine infantry company to clear the hill and allow the recon team to be pulled out. Reportedly there remained only eight rounds of ammunition between the survivors; the rest had picked up enemy weapons.

Howard's steadfast leadership and cool under fire during the battle for Hill 488 earned him the Medal of Honor. He was also awarded a Purple Heart, along with every other member of the team. Thirteen members of the team were awarded the Silver Star for their bravery. The remaining four members of the team received the Navy Cross. Six of the Marines of Team 2 received their awards posthumously. The recon platoon was the most decorated unit for its size ever in the history of the American military.