The third Revolutionary 'midnight ride' you never heard about

The British are coming, the British are coming!" This cry likely brings to mind the name of Paul Revere, immortalized in Henry Wadsworth Longfellow's poetry. Students learn about the legendary ride as early as elementary school, but Revere's younger, female counterpart is rarely mentioned: Sybil Ludington.

On April 26, 1777, when she was just 16 years old, Sybil rode from Putnam County, New York to Danbury, Connecticut to warn of advancing British troops. Her ride took place in the dead of night, lasting from 9:00 P.M. to dawn the next morning. She rode her horse, Star, over 40 miles to warn 400 militiamen that the British troops were planning to attack Danbury, where the Continental Army held a supply of food and weapons.

The militiamen were able to move their supplies and warn the residents of Danbury. The afternoon following her warning, British troops burned down several buildings and homes, but few people were killed. It was considered a wild success by the militiamen. Sybil was heralded as a hero by her friends, neighbors, and reportedly even General George Washington.

Her ride is similar to those of William Dawes and Paul Revere in 1775 in Massachusetts, and Jack Jouett in 1781 in Virginia. However, Sybil rode more than twice the distance of these midnight riders and was far younger. You may ask why Sybil was the one to take on this ride: Her father, Henry Ludington, was a colonel and the head of the local militia.

Sybil had long moved from town to town with her father and previously saved his life from a royalist assassination attempt. It's not known if Sybil volunteered for her ride or if her father requested her assistance in a moment of need. In any case, her brave contribution undoubtedly saved the lives of many men, women, and children.

After the war, at 23, Sybil married a man named Edmond Ogden. Together they had one child, and settled on a farm in Catskill, New York. Here, they lived and worked until her death in 1839. She was 77 years old. Sybil was buried near her father in the Patterson Presbyterian Cemetery in Patterson, New York.

Although remembered in Putnam county and the surrounding area, Sybil Ludington was largely lost to the annals of American history. It wasn't until after her death that her story gained traction. The tale of her ride was first shared among her family and eventually documented by her grandson. In 1880, a New York historian named Martha Lamb published an account of Sybil Ludington's famed ride in a book about the New York City area, documenting Sybil's life after her ride as well.

In 1935, New York State commissioned a series of historical markers along Sybil's route. A statue of the young woman was erected near Carmel, New York in 1961 and smaller statues can be found stretching from the Daughters of the American Revolution Headquarters in Washington, D.C. to Murrells Inlet, South Carolina.

Sybil made an appearance on a postage stamp as part of the "Contributors to the Cause" United States Bicentennial series in 1975. Since 1979, every year in April a 50K ultramarathon is put on in honor of Sybil's legendary ride. The hilly course covers roughly the same grounds as Sybil's route, and finishes near her statue on the shore of Lake Gleneida, Carmel, New York. 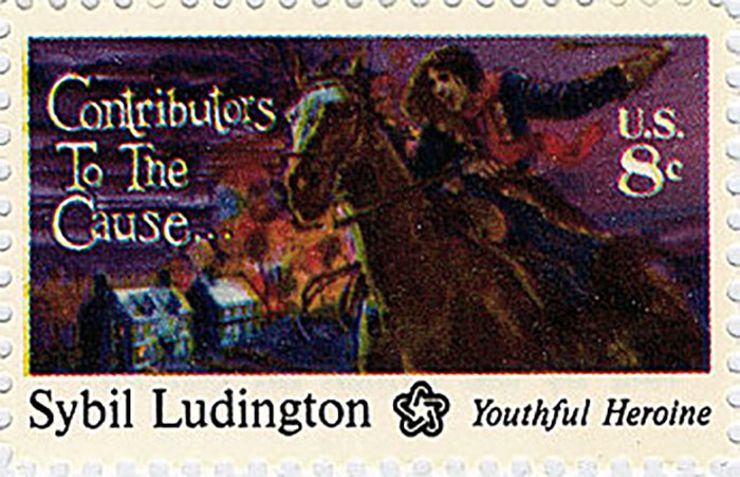 It's worth noting that not every historian is convinced of the veracity of Sybil Ludington's midnight ride. Paula D. Hunt published a paper in The New England Quarterly arguing that there's no reliable historical evidence to prove Ludington indeed made the trip from New York to Connecticut. The New York Times also examined the issue in a 1995 article about the Sybil Ludington statue in Carmel.