Russia's "fifth-generation," "combat-tested," "stealth" fighter jet has a lot of dubious claims made about it, but recent close-up photography of the plane from Russia's Victory Day parade on May 9, 2018, reveals it's just not a stealth jet.

Russia has tried to sell the plane as a stealth jet to India, but India backed out. Considering a shrinking economy and defense spending, it's unclear now if Russia will ever produce the Su-57 in reasonable quantities.

Business Insider asked a senior scientist working on stealth aircraft how to evaluate the plane's stealth, and the results were not good.

Take a look at the pictures below and see if you can spot what's wrong:

T-50 aircraft got new livery for the Parade of Victory pic.twitter.com/0z99xY53Sq

The scientist, who spoke on condition of anonymity because of the sensitive nature of stealth work, pointed out six major problems from the pictures.

First, take a look at the seams between the flaps on the aircraft — they're big. For reference, look at the US's F-22, the stealthiest fighter jet on earth:

The flaps at the end of the wing have very tight seams, which don't scatter radar waves, thereby maintaining a low profile.

Secondly, look at the Su-57's vertical rear tails. They have a wide gap where they stray from the fuselage. Keeping a tight profile is essential to stealth, according to the scientist.

Look at the F-35's rear tails for reference; they touch the whole way.

Third, look at the nose of the Su-57. It has noticeable seams around the canopy, which kills stealth. The F-35 and F-22 share a smooth, sloped look.

It's likely Russia doesn't have the machining technology to produce such a surface. The actual nose of the Su-57 looks bolted on with noticeable rivets.

Finally, take a look at the underside of the Su-57; it has rivets and sharp edges everywhere. "If nothing else convinces that no effort at [stealth] was attempted, this is the clincher," the scientist said.

Russia didn't even try at stealth, but that's not the purpose 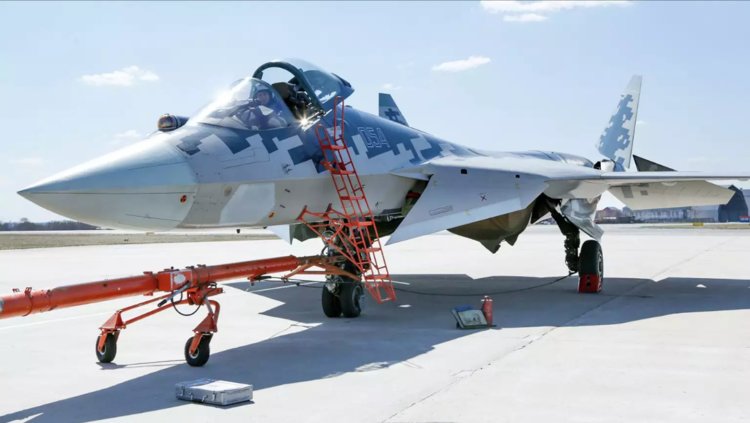 As the scientist said, Russia didn't even appear to seriously try to make a stealth aircraft. The Su-57 takes certain measures, like storing weapons internally, that improve the stealth, but it's leaps and bounds from a US or even Chinese effort.

This highlights the true purpose of Russia's new fighter — not to evade radar itself, but to kill US stealth jets like the F-35 and F-22.

The Su-57 will feature side mounted radars along its nose, an infrared search-and-track radar up front, and additional radars in front and back, as well as on the wings.

As The Drive's Tyler Rogoway writes, the side-mounted radars on the Su-57 allow it to excel at a tactic called "beaming" that can trick the radars on US stealth jets. Beaming entails flying perpendicular to a fighter's radar in a way that makes the fighter dismiss the signature of the jet as a non-target.

Any fighter can "beam" by flying sideways, but the Su-57, with sideways-mounted radars, can actually guide missiles and score kills from that direction.

Russia has long taken a different approach to fighter aircraft than the US, but the Su-57 shows that even without the fancy percision-machined stealth of an F-22, Moscow's jets can remain dangerous and relevant.